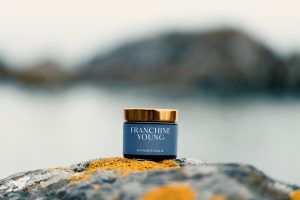 Menopause and My Journey to Ethical Skincare

I never thought this story would lead me to developing my own ethical skincare. When I started to experience perimenopause I thought something terrible was happening to me. Consequently, by the time my body reached menopause, I thought I was going mad.

Little did I know it was the beginning to me developing and launching my very own skincare brand Franchine Young Ireland.  But more on that later…

At  the time, I had neither the self-awareness nor the support of a system to recognise that what was happening was perfectly normal. It could be managed. Instead, I underwent years of physical and emotional upheaval.

Two things happened that changed the course of my well-being and my life:

1.       First of all, a nasty and persistent rash developed suddenly across the lower half of my face

2.       Then I found a Gynaecologist who recognised my symptoms and accurately diagnosed them

So, I was now on a path towards a whole new way of thinking, living and being. And it was largely thanks to my skin.

My sister and I grew up watching our mum maintain a very simple daily skincare routine.

She had two products – a cleanser and a moisturiser – and that was it. Our mum was a good role model in terms of a no-fuss, simplistic approach to her skin. It is something I inherited and also passed onto my own two daughters.

As I became older I would experiment with skincare, trying to find the right regime for me. I would always gravitate towards ethical skincare and more natural products.  The fewer chemicals and artificial additives the better.

It’s true however, that I never really gave my skin too much thought. It was reliable in its normal-to-dry way; it could handle a light layering of daily make-up; it was good to me.

Until, suddenly, one day it wasn’t.

One particular morning, I awoke to an aggressive, scaly, red and hot rash.

It travelled from the base of my nose all around my mouth, over my lower face and down to my chin. No matter what I did it would not go away.

Consequently, I was prescribed treatments. I went to experts in all manner of fields, but nothing worked. Make-up wouldn’t hide it. Although the rash came from nowhere, other problems had been plaguing me for months, even years.

My body had been enduring so much.  As a result it reached its tipping point. My skin was making that message loud and clear.

Perimenopause and Menopause – My Symptoms

As it transpired, I began to experience perimenopause in my 40s. I just had no idea that’s what it was. Looking back I describe it as PMT multiplied by one hundred. By the time I entered menopause my body and well-being felt completely under attack.

My periods could last up to ten weeks (one lasted just under 12) and my limbs would go numb. I developed a facial tick and hot flashes were rampant. But it was the anxiety and emotional lows that were the most challenging.

It all became so overwhelming that I applied for extended sick leave from work. At home, I entered a phase of “very low productivity”. In my early 40s, I was diagnosed with a form of chronic fatigue syndrome. Many previously-settled symptoms returned.  There just wasn’t any energy.

One particular day I drove somewhere and was walking away from the vehicle.  Suddenly, I realised my legs seemed to be a split second behind where they really should be. A wave of panic overcame me and I returned to the car.

I went to drive home, but I couldn’t find the gear stick. No matter what I did, it just wasn’t there.

As a result, I wondered if I was now dealing with a full-blown neurological disorder.

At Last – an Accurate Gynaecological Diagnosis

Soon after, my GP referred me to a Gynaecologist.

My husband came along to the appointment with me. During the session I talked to the specialist about everything I had been experiencing. I explained what was happening inside and out. Then I braced myself, ready to hear that I was going mad.

“You’re not experiencing anything I haven’t already seen many times before.  I know what is happening to you.  There is no over-the-counter cure. You need to listen to me. Everything is absolutely normal. This is menopause,” said the Gynaecologist.

At last, it was all making sense! Someone was telling me that these physical and emotional problems were not at all abnormal.

And so my journey to wellness began.

When Menopause Happens, Life Isn’t Winding Down. It’s Flat Out.

Menopause might signal that a woman’s time to have children is coming to a close.  However, ironically it often happens when the modern-day woman is dealing with so much on her plate.

This was every bit the case for me. My career was stressful. I was working full-time supporting people with mental ill health and/or physical disabilities.

Life wasn’t moving into some golden age gentility; it was dialling up and it needed me to be 100%.

There was no space to sit back and take stock of what was happening to me.

The Gynaecologist placed me on a light Hormone Replacement Therapy (HRT) and I then sought the expertise of a Nutritionist. My aim was to address my diet and help make other incremental life improvements.

I joined a menopause forum, which I call a “lifesaver”. It was invaluable to be able to access a pool of women who were all experiencing different stages of the same life stage.

There was always someone who knew exactly what I was going through. They were on hand to share their experience and offer their guidance or suggestions. I began to make other changes to my lifestyle and became less of a yes person.  Instead, I started to make decisions that led to better outcomes for myself.

I gravitated more and more towards nature and sought to remove complexities and to find simplicity in as much as possible, including ethical skincare. And this is where we return to the angry facial rash.

As you now already know, the rash wouldn’t go away.

I was prescribed medicines and lotion, but it persisted. My GP and pharmacist told me that it resembled adult rosacea and could be quite common in women in perimenopause. I tried to hide it with make-up, but it was too angry and too prominent. To my horror, it seemed here to stay.

My husband and I were walking past a High Street skin product store when he stopped and suggested we go in. We’d tried everything else, why not a more upmarket store?

The sales assistant examined my face and suspected it was hormonal based on the location of the rash. I bought two incredibly expensive creams. A fortnight later it was actually a shock to see some improvements start to show. Well, they seemed to work a lot more than anything up until that point.

It got me thinking. I dabbled in creating my own skin creams as a very young woman. I also trained as a reflexologist (although I only practiced on my family). Perhaps I could make better than I could buy…?

Creating My Own Ethical Skincare Solution

Already empowered with a strong knowledge of essential oils and plants, I began to research more deeply.

I selected a number of organic essential oils and varying solidifiers (natural butters).  Over a matter of months I trailed many combinations. Eventually I was confident in  the perfect mix for my skin. Within days, the facial rash completely disappeared.

In just a matter of weeks I began to receive compliments about my skin. Furthermore, family members started asking for balm samples. Friends soon also began to ask, and it wasn’t long thereafter that friends of friends started to place orders.

It got me thinking; this is a Wonder Balm for my skin, but it is having a positive impact on many others as well…

Balm awareness and interest really started to gather momentum.  I began to wonder how I would keep it all up. Out of the blue I received an email offering grants or guidance to women with new business ideas.

It stopped me in my tracks.

What if my Wonder Balm could become something positive for those beyond my social and family circles? What if it could be the nugget of a business idea? I applied, and the rest is history.

Caring for Our Skin Starts with Our Mindset

For me, truly caring for my skin started when I began to change my mindset.

My facial rash was a traumatic physical symptom of menopause. However, it prompted me to realise that self-care is not in a beauty jar.

Until that point if I were honest with myself, my skincare regime was mostly about a desire to hold back time.

Now I know that my skin radiates good health. I don’t have to conceal anything with a layer of make-up; my skin glows because I care for my soul and I know how to nourish myself.

As a result, I am responsible for creating my very own ethical skincare, which I now share with the world.

To find out more about the Franchine Young Wonder Balm, visit here